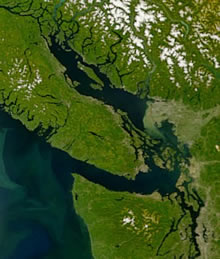 Kwiáht was a local partner in the surveys of flora and fauna on the BLM lands that are now the San Juan Islands National Monument and one of the first organizations accredited with the 21st Century Conservation Service Corps.

Kwiáht was first to draw attention to the role of the San Juan Islands as a summer nursery for juvenile wild Chinook salmon, and first to document the diet of juvenile salmon that visit the islands on their annual seaward migrations. [See: Community Salmon Teams]

Kwiáht was first to demonstrate the contribution of local pesticide and herbicide use on nearshore pollution in the San Juan Islands, and first to identify copper and surfactants as major threats to the islands' nearshore food webs. [See: Toxicology and Consumer Empowerment]

Kwiáht has pioneered the use of polypropylene fabric devices for simple, inexpensive collection of organic contaminants from storm drains and nearshore waters for water quality monitoring [See: Green Corridors and Urban Drainage]

Kwiáht is pioneering the design and educational use of "STEM-A gardens" in which young children learn about botany, entomology, bird behavior, chemistry and genetics while honing their observational skills including writing and drawing. [See: Classroom Projects]

Kwiáht established the first and only bat conservation program in the San Juan Islands [See: Bats]

Kwiáht conducted the first systematic studies of pollinators of native plants throughout the San Juan Archipelago and is pioneering the design and use of "sentinel gardens" to monitor pollinator populations [See: Native Pollinators]

Kwiáht was first to confirm populations of Northern Flying Squirrels, Alligator Lizards, Fairy Shrimp, and other animals in the San Juan Islands, and manages a genetic diversity archive of the islands' mammals and freshwater fish. [See: Small Mammal Distribution]

Kwiáht was first to advance evidence for Native American (Coast Salish) cultivation of camas in well-defined fields, and to document the genetic diversity of camas in the San Juan Archipelago. [See: Ancient Gardens and Camas]